When it comes to animals in the WWE, They call Brock Lesnar “The Beast” For a reason.

Ever since Brock Lesnar showed up on the scene he has been revered as one of the WWE’s most fierce competitors. Very few men on the roster besides Bill Goldberg can stand toe to toe with The Beast.

If you’ve been keeping up with Raw lately, then you already know why I’m excited about this development. The upcoming Fatal 4-Way at Summer Slam this year looks like its building up to be one for the record books. 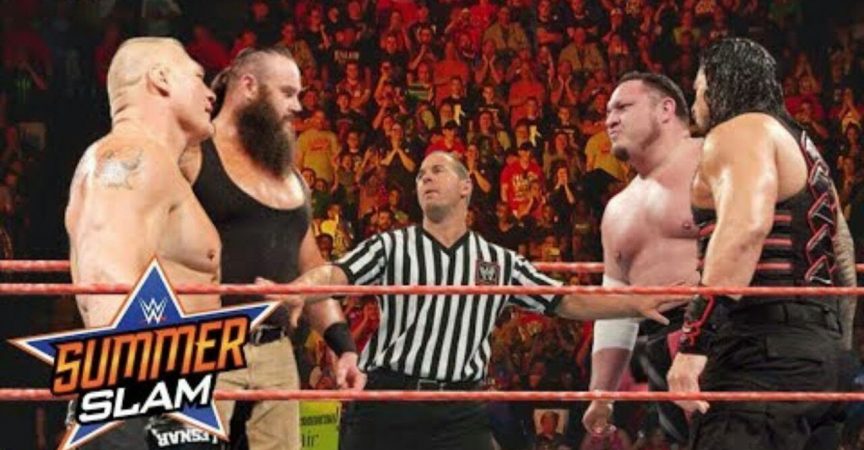 Former champion Roman Reigns and “The Monster Among Men” Braun Strowman have been going at it for months. When these guys go at it I’ve come to expect an ambulance to come into the mix. Roman lost the brutal Ambulance Match at Great Balls of Fire, but took Braun out by totaling an ambulance with him in it.

Reigns also is no stranger to our other 2 competitors in the match. He recently hit Samoa Joe with the ultimate insult when he called him “just some guy named Joe”. Samoan’s have a deep history in the WWE, and Reigns hails from the top Samoan family in WWE history. So to Joe that had to burn.

With all the smack talk of who’s accomplished what from the 4 athletes, I haven’t heard anyone mention Reign’s and Lesnar’s epic match at Wrestlemania 31. If you remember Roman had Brock busted open, and things were looking pretty good for him. That’s when former Shield partner Seth Rollins cashed in his Money in the Bank contract to become champion.

Brock Lesnar and Samoa Joe also had an intense match recently. I expected Joe to get demolished. It ended up being an excellent match where Brock had to reach down deep to hold on to his title.

These 4 superstars are no strangers to one another, and are some of the WWE’s heaviest hitters.

This is where the bullshit comes in. Roman, Braun, and Joe were having a bitch fest for a couple weeks about who was gonna take on Brock at Summer Slam. While Brock was sitting merrily at home drinking tea with his pinky up, General Manager Kurt Angle took it upon himself to put him in this unfair match. Paul Heyman implied the call came from the higher ups.

In a 1 on 1 with any of the 3 wrestlers Brock is always gonna be the favorite. Put him in a match against all 3 at once and the odds are no longer in his favor. Braun is a powerhouse, while Roman and Joe are known to squash their beef and team up against giants.

So Heyman put it on the line. He declared if Brock loses this unfair match that him and Lesnar will be leaving the WWE for good. I wouldn’t mind seeing any of the 3 contenders take the Universal Championship Belt, but don’t want to see the WWE lose Brock all together. I love occasionally seeing him come out like a tornado in a trailer park. Hes one of the WWE’s greatest assets.

Now that Heyman made this declaration I really feel invested in the results of this Fatal 4-Way. Brock Lesnar is a legend of our time. This adds a lot of weight to Summer Slam, and I’m dying of anticipation waiting to see how this plays out. Please let us know your predictions in the comment section below.

Find out more or adjust your settings.

This website uses cookies so that we can provide you with the best user experience possible. Cookie information is stored in your browser and performs functions such as recognising you when you return to our website and helping our team to understand which sections of the website you find most interesting and useful.

Strictly Necessary Cookie should be enabled at all times so that we can save your preferences for cookie settings.

If you disable this cookie, we will not be able to save your preferences. This means that every time you visit this website you will need to enable or disable cookies again.